An avid outdoorsman Lew always had an interest in fishing.  As a young adult he spend his winters commercial fishing for Whitefish below the lace ice in the Northwest Territories and Alberta Canada. He spent his summers as the head Lifeguard at the Jasper Resort in the Canadian Rocky Mountains.  He resigned his Lifeguard duties and started a mercantile Store in Northern Alberta where he met and married Glady.  One of their best selling products was Lew's "Best by Test" coffee, they always had a freshly brewed pot for their customers.  We still use Lew's "Best By Test" slogan to advertise Silver Horde Plugs.

Lew and Gladys later moved to Washington State in the Pacific Northwest of the United States where they started to farm mink for the pelts.  During this period, Lew continued to supplement their income by working in various positions at the fish plants on the Seattle waterfront.  He was able to use the fish byproducts to feed his Mink.  He became friendly with many of the fisherman who came to the processor to sell their catch.  Being a fisherman himself Lew was eager to discuss fishing techniques with anyone who would stop long enough to share a cup of coffee with him.  In a short time Lew had became very familiar with their methods and needs.

In 1948 due to the disease of Distemper in their Mink Lew and Gladys experienced a very poor season.  They decided to take their small savings and invest in some other type of business venture.  Lew was aware that many of the Salmon trollers were beginning to use a lot of plug type lures made from cedar and other woods.  many of these lures were hand carved by the fishermen and their crews.  Some small manufactures where also making their own line of wooden lures.  Lew's fishermen friends were always complaining that the wooden plugs were inconsistent producers, as the good one's became water logged and ruined.  Lew reasoned that the newly developed process of plastic injection molding could duplicate these lures.  He took their savings and had an injection-molding tool made for a commercial type Salmon trolling plug.  Lew had the parts made hauled them home then he and Gladys assembled and painted them in the old Mink sheds.  Together they developed a high quality Salmon plug.  Called the "Ace Hi", their lure was just what the fishermen had been asking for.  Business was brisk and soon every commercial salmon troller on the entire West Coast from California to Alaska had to have Silver Horde Plugs.

Our company name "Sliver Horde" is the namesake of the book The Silver Horde written by Rex Beach.  Lew was inspired by Rex Beach's account of the vast amounts of silvery salmon, known as a "silver horde".  The book tells of the birth of Salmon fishing industry in Alaska where a silver hordes of fish were caught in fish traps and nets.  The book story was later dramatized and produced as one of the first Hollywood talkie movies.

In 1954 at the age of 16, Lew's nephew, Barry Morrison emigrated from Kelowna, British Columbia, Canada to attend school and work with his uncle and aunt Gladys.  Barry's future wife Marilyn started working for the company in the summer of 1955 when she was 13 years old to paint plugs and package lures.  Marilyn continued to work for the company after school and during summer vacation.

In 1958 a rising sport recreation angling fleet began using more artificial lures instead of bait.  This lead to the development of an injection molded plastic plug specially designed for their needs.  This business quickly grew larger and larger.  Today anglers across the United States use Silver Horde Sport Plugs for a wide variety of game fish.  Silver horde presently manufactures 15 different fishing plugs for the commercial and sport markets.

In the spring of 1962 Lew passed away.  Barry continued working with his aunt Gladys to help manage the company.

in the mid 60's Barry Morrison pioneered the use of the brightly colored plastic lures called Squid or Hoochies.  The Squid/Hoochies revolutionized commercial fishing tackle techniques.  Prior to their introduction the fishermen only had bait or flies to use behind their Flashers or Dodgers.  As the hoochies were easy to use and highly effective soon most commercial and sport trollers on the West Coast were using them.  Over the past 30 years since their introduction we have developed many popular color combinations including our popular "Double Glow Spatter Back" patterns.  The Squid, Fly or Spoon trolled behind a Flasher or Dodger has proven to be highly effective for attracting an amazing amount of Salmon and Trout.  It is preferred trolling method for most sports or commercial anglers.  These are just a few examples of improvements made over the years by Silver Horde to increase our product's quality and effectiveness.

In 1987 Gladys Morrison retired selling her share of the company to Barry and his wife Marilyn.  Currently Barry and Marilyn's two sons Cory and Kelly and a dozen or so trusted employees continue to produce the Silver Horde Lures.  The Silver Horde Crew with attention to detail, strive to consistently seek out and produce the same High Quality lures and components that made Lew Morrison's Plugs so popular 50 years ago. 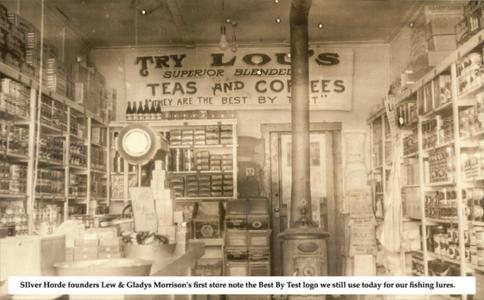